Ravi Chopra, a photojournalist who founded DISHA, was driven by an extraordinary dream - the dream that no underprivileged children would be deprived of basic rights. He was sure that the hidden creativity of children would flower given a right chance. He started at a very young age to work with the children living in the urban slums and rural villages by teaching them photography to impart them a job-oriented skill. He worked with runaway children living on New Delhi Railway platform, with mentally challenged and handicapped children in institutions like Anandvan and with village children living in remote hilly areas. His passion to work with children took him to visit slums in Delhi where he found children surrounding him wherever he went to get a glimpse of the world around them through his camera.

He also taught children to draw comics and raised money by publishing these in the newspaper. He won a national award for his photographs highlighting the plight of education of children.

These qualities of resourcefulness and determination were to come in handy when Ravi and 10 of his friends started DISHA in1992. They felt that something needed to be done to improve the situation of the underprivileged Indian child and women 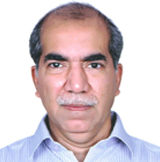